The largest primate on planet Earth, mountain gorillas are strong apes inhabiting the slopes of volcanoes in Africa.

Mountain gorillas are endangered animals and their habitat is limited to a number of protected national parks in two regions of Africa – Uganda having the largest number in Bwindi National Park and the remaining numbers found in Rwanda and the Virunga mountain ranges of the Congo.

The gorilla is a gentle species and considered to be highly intelligent, having been observed using tools like other great apes, and communicating using a variety of vocal sounds.

❭❭ Mountain Gorillas belong to the family of primates and they are the biggest primate species.

❭❭ Mountain gorillas are mainly herbivorous. They feed on leaves, fruits, roots, bark, flowers, stems and buds, and occasionally small invertebrates,  mainly tiny insects like ants, larvae, and snails. Adult males can eat about 30kilogrames in a day while adult females can eat 18 kilograms of food and they hardly take water

❭❭ Mountain gorillas move in groups of up to 30 members. An older silverback male gorilla leads the group.

❭❭ These animals are very shy but strong and very aggressive especially when threatened. They roar and beat their chests when annoyed. The group leader charge when there is threat.

❭❭ Weighing about 2 kilograms. The newborn is fed with breast milk and transported in the back or the belly of his or her mother.

❭❭ Because Mountain Gorillas are very closely related to humans, they are very vulnerable to contract diseases transmitted by humans. 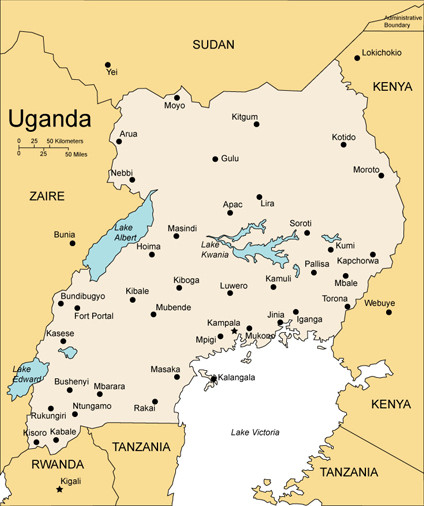 A permit allows you to view gorillas for only one hour but the trekking itself can take a minimum of 30 minutes or up to nine hours while looking for gorillas in the forest.

Before booking accommodation in Bwindi National Park, One should consider the gorilla permit he/ she has. This is because Bwindi has different sections or regions where gorilla trekking is done and each region has its own accommodations and gorilla families. These regions include Buhoma in the North, Ruhija in the East, Rushaga and Nkuring in the South.

A gorilla permit in Uganda costs USD600 and these can be bought from The Uganda Wildlife Authority headquarters.

For Rwanda gorilla permits costs USD1500, you can buy them from Rwanda Development Offices in Kigali or Ruhengeri.  It is usually advisable to book gorilla permits as early as three months so as to ensure availability. This is because gorilla trekking is on a high demand therefore the permits get sold out as early as possible.

❭❭ Waterfall Trail heads through one of Uganda’s main tracts of rainforest, passing below tree ferns and orchids to visit 3 sparkling waterfall.

❭❭ Muzabajiro Loop Trail goes up to the summit for awe-inspiring views of Bwindi forest, the western rift valley and the Virunga volcanoes.

❭❭ River Ivi Trail takes an old road through bea emerging close to Nkuringo along the southern edge and is highly recommended for birders.

Wake up early in the morning and depart from your accommodation and head to the information centre for briefing. Mountain Gorilla Tracking starts where the safari-guides last saw the Gorilla group the previous day and then track them up to their latest location given that they are always on the move.

Trekking itself can take a minimum of 30 minutes or up to nine hours while looking for gorillas in the forest. The move is abit teasing as you have to move through the thick forest where these wonderful animals live. After a hustle in searching for these animals, you are given an hour to view the gorillas witnessing them bond with and breastfeed their young ones, eating, mating, and many more. This is certainly the climax of your safari because it gives uncomparable experience. While in the Presence of Mountain Gorillas

Maintain a distance of 5m which is approximately 15 ft from the fascinating Mountain Gorillas.  This is a way of protecting mountain gorillas from any diseases plus illnesses transmitted by humans.

Keep together as a team when in their presence.

All Voices must be kept low rather better to keep silence and actually just enjoy the moment in the presence of the Mountain Gorillas.

Do not eat food or take drinks while in their presence.